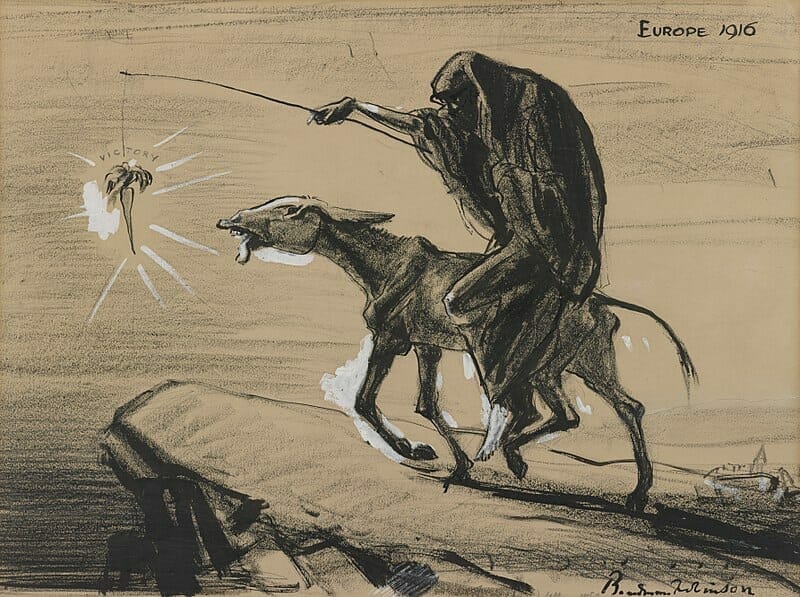 The Carrot and Stick feature image for this post is “Europe 1916” by Boardman Robinson. Anti-war cartoon depicting Death enticing an emaciated donkey towards a precipice with a carrot labelled “Victory.”

The whole “carrot and stick” narrative is inter-generational and will never end. We have all heard our grandparents talk about “the youth of today” and “in my day”.

Your parents probably say the same.

What does the phrase carrot and stick mean?

The carrot and stick method is characterised by both offer of reward along with the threat of punishment. It is to induce the desired behaviour we commonly see during dog training.

During training a reward to the student with something pleasurable when the desired behaviour has been achieved and punish if the student gets it wrong.

So, to achieve this training style, we need to look at the meaning of the word “consequences”.

This is where we have a severe problem in western society. There are no longer any consequences to bad behaviour at school, work or in society.

As far as I can, I do the right thing. Either at home, when out in society, or at work. Most of my generation and previous generations did this also. Why? Because of Shame! Misbehaving, breaking the law and losing your job. Because you did not follow the rules or directions was humiliating and shameful.

There is nothing worse than humilitation in front of your family, friends and peers. This was one of the consequences of bad behaviour or the stick, to keep you in line.

What is carrot and stick leadership style?

As a leader, you need to motivate your team; the carrot is the reward for good behaviour or achieved results. On the stick side of management, you need to effectively punish bad behaviour to ensure the lack of results is not rewarded.

For example, if you want your sales team to sign contracts with five new clients per month. You need a reward for those who do so and a consequence for those who don’t. Your reward could be an increased commission on those five sales. The result could be taking a percentage off the employee’s commission with the lowest number of new clients that month.

The carrot and stick approach can work very well to modify the behaviour of your employees, guiding them to avoid punishable actions and engage in activities that will earn rewards. If your prize is attractive enough and you have undesirable consequences, this method can help motivate employees to achieve your preferred outcomes.

At some point in the last twenty-something years, an academic, more than likely with no children, dreamed up the idea that competition in schools was terrible. In the UK, more than half of the primary schools have banned winning in any of their activities. Everyone wins just for taking part.

Children in school who exhibit lousy behaviour are now given “special” activities to enjoy.

So, if we look at the stick and carrot methodology, we are now teaching our children that life is a carrot and there is no “Stick” or “Consequence” for bad behaviour.

These children are now in the workforce, and managers are struggling to manage them.

They are “entitled”, spoilt, and believe they can do what they want without consequence. The current generation is also trying to erase parts of our history, culture and language that they disagree with because, apparently, it is their God-given right.

Who created the carrot and stick theory?

The Carrot and Stick motivation approach is based on the principles of reinforcement and was given by philosopher Jeremy Bentham during the industrial revolution. This theory is derived from the old story of a donkey; the best way to move him is to put a carrot in front of him and jab him with a stick from behind.

What was the carrot and stick tactic of the British Empire?

In short, carrots for good performance and sticks for unacceptable performance. It is based on the belief that people are motivated by hope and fear — the hope of getting rewards and the fear of being denied rewards. If people fail to respond to carrots in the desired manner, sticks can be administered to do the trick. Unfortunately, the post was extremely brutal, especially punishments exacted in the colonies by the British military, under orders from the Empire.

There is a breakdown in western society. The 2000+ generation and their children effectively do what they want. If they don’t want to go to school, they don’t, and their parents will not force them to go even though it is still a legal requirement.

When they eventually take a job. If they do not like it and decide they are not getting promoted fast enough, they will drop tools and quit. There is no loyalty anymore in the workforce.

Statues being torn down with impunity. Public places defaced because it does not suit the current generation. For me, criminal damage was a punishable offence; although it remains a crime, society accepts it.

In Asian countries, family values are still strong. Bringing Shame or humiliation to your family is such an intense fear or stick that most people keep on the right side of society and law. The carrot for them is a good life and the ability to work in a community where the rewards are for anyone who works hard.

The stick in Asia, especially in a legal context, is also enough to keep children and adults on the right side of the law.

The east or the communist countries are not facing issues we face in the west. Our downfall is the misguided liberal way that everyone should be equal and be equal in every way. Why is this misguided? Because not everyone is born equal, not everyone wants to work. There are the lazy, the strong and the criminal.

Carrots are everywhere, even if you choose not to earn them, but there is no stick to fear.

We listen to the minorities and give them not only a voice but an overwhelming right to decide what they want to impose on the majority. Society can not be sustained like this.

So on reading this people should watch or read George Orwells “1984”, it is a warning.